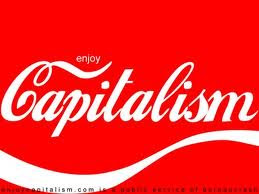 Capitalism is summed up as private ownership to produce goods or services, which results in the  accumulation of capital, competitive markets, voluntary exchange, and wage labor. America is a breeding ground for capitalists and capitalism, but many have neglected their personal morals and ethics along their journeys to succeed. Examples include the Enron fiasco, the recent real estate issues, and so many incidents in our history which influence typical Americans to feel Capitalists are villainous in nature.

What we feel would introduce consistent productive Americans is the direct result of Capitalism! Imagine families teaching their children to respect finances, credit cards being used responsibly, real estate being used as an investment tool along with the thought of achieving the "American Dream", and many more postliminary positive effects. As a result families would be able to inherently pass along both financial knowledge and tools, banks would be excited to see more consistent potential home owners, families would be better equipped to handle these periodic economic downturns, and the ultimate goal of decreasing the separation between the economical classes would sound more reasonable! Here at JB Sutton we typically use the term Entrepreneurship in referencing our investments to lessen the antagonistic feel of the word Capitalism!

So we feel it's our duty to internalize morals and ethics in every aspect of our company and within the team in our organization! Our hope is as we continue to grow, people will always think of us as one of the premier investing groups that consider the moral and ethical effects of all parties involved as deals finalize and relationships are built.
at 5:35 AM Posted by JB Sutton Founder

Nice Article, I do agree morals and integrity have been compromised for the posession of money and power..Almost seems as if we as a people were destinied to journey down this path. Thin line between greed and ambition.

Hello All! First we would like to thankyou for visiting our blog! This blog is a wholly owned subsidiary of RowCity Group, LLC. This platform will give our readers and associates to hear us discuss our investments, the current market trends, and more through the minds of our members! Please feel free to comment and contact us with your investment and idea inquiries!

We also have advertising opportunities available, so please feel to contact us at the link below! Or simply use the "Ad Space" box above and your ad will continually be displayed to our readers and business community! Thanks Again!
Contact Us (click link)
Location: Philadelphia, PA
http://rowcitygroup.com/

This blog discusses the minds and opinions of the members of JB Sutton. The posts and all herein reflect our personal views of the markets and industries. We do not guarantee the information contained in this blog and we DO NOT expect our readers to rely upon the information and opinions in this blog to confirm their views on market trends, strategies, and investment opportunities.